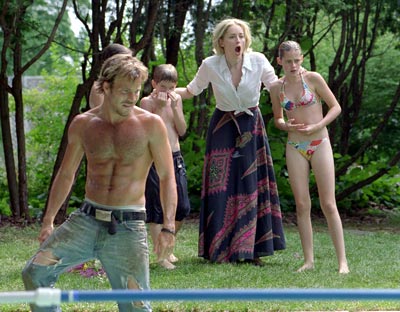 Cold Creek Manor,” as the title suggests, is a frigid tributary flowing into the hackneyed watercourse that represents Hollywood.

“Leaving Las Vegas” was a brilliant account of the destructive nature of alcohol. In an Oscar-garnering performance, Nicolas Cage was impeccable as a deadbeat drunk.

Believe it or not, both of these films were presented to you, the viewing public, by the same director, Mike Figgis.

Purportedly a fund-raising project for an upcoming production yet undisclosed, it is apparent Figgis let the Penguin classic “Horror Made Easy” be his instructional guide for “Cold Creek Manor.”

For a man who has electrified the film industry with such independent raves as “Timecode,” shot in split screen with four digital cameras in one edited take, I find it hard to believe this director has sunk to such murky depths.

As two Manhattanites fed up with the Big Apple after their son is nearly made road-kill by an SUV, Mr. and Mrs. Tilson decide to move upstate and vanquish all memory of the city’s hustle and bustle.

Purchasing a dilapidated mansion, Cold Creek Manor, they hire a manslaughter parolee (Stephen Dorff) to assist in the renovation.

He simply appears on their doorstep one afternoon, scarfs down a free meal, audibly belches, strikes a spark to a joint and coolly beckons for work.

What neither of the Tilsons realize is that the newly contracted employee is the previous owner of the residence and urgently wishes to regain a foothold.

Sure, he wouldn’t mind the company of a few female servants, i.e. Cooper’s wife and daughter (Kristen Stewart), but Cooper will have to pack his bags or else be guaranteed a plot in the local cemetery.

What ensues is a head-to-head showdown pitting weedy househusband and callous redneck.

Take a guess as to who will topple the other for outright supremacy. Think David. Think Goliath. No, I’m not speaking of David Carr’s passing proficiency in Fresno State’s 2001 run for the BCS. Oh, forget it. Never mind.

All in all, “Cold Creek Manor,” as the title suggests, is a frigid tributary flowing into the hackneyed watercourse that represents Hollywood. At least “Cabin Fever” had some degree of payoff insofar as it was entertaining.

“Cold Creek Manor” is the sort of movie that actually fuels a degenerative response. I found myself cawing like a flustered chimp and pounding my chest at the film’s closure.