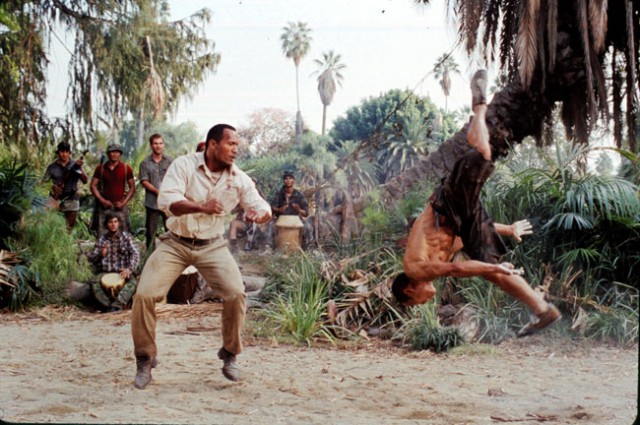 I must commend this film in being a highly amusing action-adventure stocked to the brink with aroused baboons, gnarly scuffles and even a cameo of some Austrian-accented hulk running on the California governor Republican ticket.

Yeah, “The Rundown” was one of those films.

In Dwayne Douglas Johnson’s (The Rock) finest on-screen performance to date, he portrays Beck, a retrieval expert/aspiring chef with a titanium endoskeleton. Or so it seems, at least, as his massive frame is contorted in every way imaginable, only to remain in first-rate condition.

Beck is sent out to Pele’s playground, Brazil, to haul home a Stanford dropout by the name of Travis (Seann William Scott). It goes without saying that Travis has a serious knack for adventure, whether it be treasure hunting or cluelessly ensnaring a married man’s wife for a night or two.

As it just so happens, the short-term Stanford attendee is the son of Beck’s boss, who couldn’t care less about what becomes of his own as long as he doesn’t lose his business with the man Travis mistreated.

After being taken aback by the ultra-machismo hand-to-hand smackdown Beck lays on an entire NFL defensive line, there’s no reason not to think such a dynamo could pulverize the stalky likes of Travis and have him riding wrist-in-cuff, homeward bound, in no time.

Instead, acting as a foil to Beck’s objective, Hatcher (Christopher Walken), attempts to ward Beck off with his gun-toting henchmen. To elaborate, Hatcher is bent on locating the golden gato, an Amazon relic projected to fetch millions upon millions on the black market. Hatcher’s intense longing for the artifact drives him to purchase a humongous plot of Amazonian soil and forcefully hire all natives residing in the fertile valley to assist in the mass excavation.

However, fully aware Travis may have stumbled upon the pristine lair of the long-lost remnant, Hatcher will do anything to exploit Travis’ insight, most notably taming Beck with an entourage of whips extraordinaire.

Throw in a frenzied clan of backwoods renegades, led by the sly yet stunning Mariana (Rosario Dawson), that are eager to claim what is rightfully theirs and reap the profits to propel their civilization to affluence, and you’ve got yourself one tantalizing flick.

It is the unintended quirkiness and comical relief provided by Walken that makes this film worthwhile. By far his best movie of the summer, it outduels his characterization in the sex-starved dung mound of a motion picture starring Al Pacino, a lesbian J-Lo and a self-effacing Benjamin Affleck.

If Walken isn’t rallying support from his gun-slinging search party by rambling off inaudible chatter about getting scammed by the tooth fairy, he’s commenting on the explosive action unfolding around him with one or two words. Other times, not even I have the faintest idea what the hell he’s doing or alluding to. Bellissimo.

I must commend this film in being a highly amusing action-adventure stocked to the brink with aroused baboons, gnarly scuffles and even a cameo of some Austrian-accented hulk running on the California governor Republican ticket.