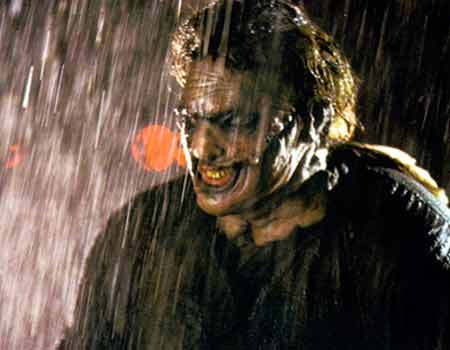 To be sadistically honest, if I had it my way, I would throw both Bay and Nispel in the way of Leatherface’s onslaught.

The preview sent flocks of moviegoers shivering out of theaters.

Upon hearing reports of grave-robbing and corpse exhibition in the vicinity of a family cemetery amid the jostling tumbleweeds of Texas, five college-aged buddies sets out to investigate the matter.

As it turns out, the burial plot is undisturbed. However, instead of returning homeward, the rambunctious fivesome elects to hang around for awhile — making themselves comfy in an abandoned roadside abode.

One by one the steady hum of an electric generator lures the post-pubescents like gnats to a bug-zapper. Alas, their wayside trot into the unfamiliar is soon to be interrupted by the whir-whir of a chainsaw and a sledgehammer to the scalp.

In the year 1974, director Tobe Hooper petrified audiences with a low-budget project set in the arid hill country of central Texas. Hooper’s reputation prior to the film’s release was mixed at best.

Some thought him a madman; others saw a glimmer of genius in his overtly sinister experimental pictures. Hooper fashioned a film originally titled “Head Cheese” that to this day remains perhaps the most terrifying movie for all time.

Flash forward to 2003. After 29 years of enduring swat after swat of callused palm to the fanny, Hollywood has finally had enough. Desperate to produce a genuine horror classic, preferably to be spat in the same breath as Hooper’s ’74 romp, the moguls have flung their greenbacks at cinematic love triangle/boom-boom extraordinaire Michael Bay and glitzy music video director Marcus Nispel. Together they have conspired to bring to us a remake of the cult archetype of modern macabre, “The Texas Chainsaw Massacre.”

Why? For the love of bejesus and the almighty, why? Why must filmmaking prima donnas like Gus Van Sant, the director of the shot-by-shot remake of Hitchcock’s “Psycho,” and Nispel yearn to capture in their own inferior vision works that are already perfect? If one cannot already decipher from my tone, I resented damn near every second of the newest take on the family of cannibalistic boondock psychopaths. It was heavily clichéd — relying on tubs of gore and the occasional “gotcha” for chills — plus it totally debunked the character of Leatherface.

In fact, what made the flesh-wearing Goliath so disturbing in the original picture was not so much the chainsaw he utilized, but the guttural whining, like that of a pig, alongside the fascination with his deceased mother. To witness Leatherface swapping his typical mask for one with a more feminine touch, complete with blush and gobs of lip gloss, and sporting an oversize knee-length dress over his blood-slathered apron was what genuinely unsettled yours truly.

To be sadistically honest, if I had it my way, I would throw both Bay and Nispel in the way of Leatherface’s onslaught. As punishment for making such a pitiful flick, I feel as though they deserve to meet the grind of the heathen’s weapon of wrath.

My recommendation: For pity’s sake, rent the original.