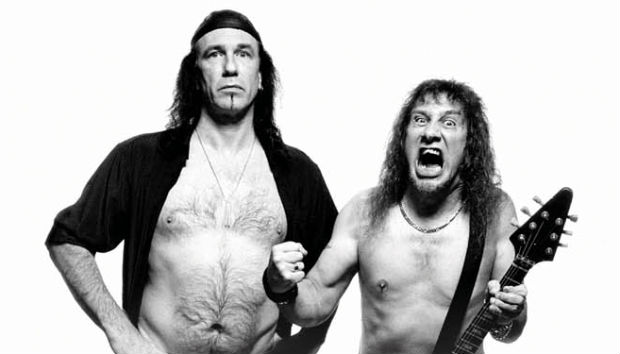 Anvil at the Riot Room

These 50-something Jewish Canadians with Cro-Magnon manners were about the music – metal so heavy it leaves listeners whoozier than a Prom Queen at a kegger.

Concussed.
I don’t know how else to describe how I felt following Anvil’s performance Saturday night inside Westport’s Riot Room. My head was already reeling from the opener Troglodyte, an Independence-based bigfoot death metal band who’s best known ditty is called Skunk Ape Rape. Once Anvil had completed their set list, my brain was scrambled cheese eggs.
In the film Anvil: The Story of Anvil, a 2007 documentary about the band, I got the impression the group’s front men Steve “Lips” Kudlow and Robb Reiner (a coincidental homage to Rob Reiner, director of This is Spinal Tap) didn’t give a sewer rat’s ass about the producers, the critics, the fortune tellers. These 50-something Jewish Canadians with Cro-Magnon manners were about the music – metal so heavy it leaves listeners whoozier than a Prom Queen at a kegger. It’s why Lips forsook the middle class path of both his brother and sister to make minimum wage and don a hairnet while working as a caterer of school lunches. If Anvil was once on the cusp of greatness (they were admired by the likes of Slash and Lars Ulrich and shared a stage three decades ago with Whitesnake, the Scorpions and Bon Jovi), Saturday night was a return to form.
Playing before an assemblage of fans ranging in age and look (there were the Mohawked, the gray, the bald and the biker jacketed), Anvil seemed perfectly suited for the environs – a venue primitively lit with a quaking floor. Anvil initiated the show with “Future Wars,” a song from their 1983 album Forged in Fire. With its meandering instrumentals and kill ‘em all airs, Anvil’s influence on ‘80s metal is undeniable. Lips’ vocals and guitar soar and swoop like birds of prey. When finished, the group was buried beneath an avalanche of “An-vil” chants.
Lips – who sports an Abe Lincoln goatee and a mug like the smirking hunk of cosmological cheese in the Melies brothers’ silent film A Trip to the Moon – was full of thanks on this evening. After promising to shake every attendee’s hand (he did good on the promise following the show), Lips said, “Holy fuck, Kansas City, you know how good it feels to be here tonight? I see lots of scalps shinier than mine out there. Ready to bang those fucking heads together? This is from our turd, uh, I mean third album.”
Lips launched into “School Love,” the debut track from their 1981 album Hard ’n’ Heavy. But it was the next song, “Winged Assassins,” that sent hands skyward – some hoisting cameras and 24-ounce Pabst Blue Ribbons, and some emblemizing devil horns.
“Hey, hey, hey,” Lips began the song, “A one, a two, fuck you!”
One of the concertgoers – a leather-clad Dom DeLuise look-a-like – summed up Anvil’s sound the best during a rip-roaring rendition from the title track of their latest album, This is Thirteen.
“Dude, they’re the bridge between Iron Maiden and Metallica,” he yelled, grimacing. “And it’s so loud in here I just ripped ass and no one heard it.”
Anvil’s concert Saturday night was everything a metal show should be: people wedged tighter than a tin of sardines, chiropractic tunes and the occasional waft of fart.