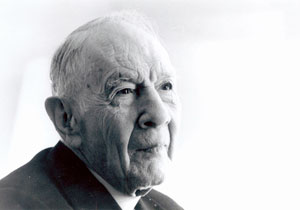 But at all times I feel sure that my own shapeless personal religious sense, whatever that may be, is deepening and increasing. Everything that is, is holy.”

My introduction to James Agee – the writer of such heat-seeking journalism as Let Us Now Praise Famous Men and film criticism that always found a redeemable moment, no matter how bad the movie – dates to the film The Night of the Hunter, of which Agee wrote the screenplay. My dad had me watch it years ago, an ode to German Expressionism with its dreamy set design, nursery rhyme score and skewed camera angles. The film perturbed me, more than any shockfest could muster. In it, Robert Mitchum plays Reverend Harry Powell, a self-appointed preacher who abides by the words LOVE and HATE tattooed on the knuckles of his right and left hands. Powell marries and slays widows for their money. By doing so, he believes he is fulfilling the will of God, who frowns upon once-married women guilty of igniting another man’s carnal flame.

Agee’s life drew some parallels to the contradictory words etched into Powell’s knuckles. Day to day, his passions danced from love to hate but so often he was in purgatory, ever mindful of the world’s ails yet hopeless to absolve them. His palls were alcoholism and a propensity for reporting on the nation’s underclasses, be it cockfighting or the impact the Tennessee Valley Authority would wage on the mountains and its people.

Nowhere is this expressed better than in his letters to Fr. James Harold Flye, an Episcopal priest. The collection of letters was recently reissued 50 years after its publication. The letters are equal part confessionals as declarations. No one knew Agee like Flye did.

Agee and Flye’s friendship lasted 35 years, forged when Agee arrived in autumn 1919 at St. Andrew’s, an Episcopal boarding school for boys in Sewanee, Tennessee. Agee was 10 years old. His father had been struck dead three years earlier in an automobile accident, a matter recounted in full years later in Agee’s autobiographical novel, A Death in the Family. The letters began in 1925 from Phillips Exeter Academy, a college preparatory school in New Hampshire, a few months after Agee traveled to England and France with Flye, and ended days before Agee’s death of a heart attack in May 1955. The final letter was never mailed, the addressed and sealed envelope discovered atop his home’s mantelpiece. Many of the letters from Agee’s teenage years center on the expected: girls, his part in a play (as Baptista, “the wheezy old man,” in Taming of the Shrew), the difficulty of fitting in. They also reveal his interest in witchcraft and demonology, the honing of his writing at the expense of good grades, the suicide of a friend. Before this experience, such heartbreak in literature had little bearing.

Fiction, no matter how realistic, was fantasy. He can no longer “read and write of the most sordid and sad things with rather impersonal interest.” Years later, while living in New York City, Agee informs Flye of his own suicidal thoughts, “I hate and fear suicide, but I don’t have a thought that isn’t pain and despair of one sort or another…I simply am not capable of being the kind of person, doing the kinds of things, which I want to be.” Flye’s reply – as much about the futility of self-hatred as the spiritual tone of the times – likely saved Agee’s life and propelled him to employ his writing talents to counteract “the epidemic of despair and weariness” that had overtaken the globe in 1932. The country was ensnared in the talons of the Great Depression and Hitler was close to manhandling power over Germany. Agee found the perfect expression of the world’s troubles in the orchid, whose corporatization he chronicled in Fortune magazine: “liking a thing because it is the Largest, the Loudest, the Most Expensive, the most supercharged with Eroticism, Glamor, Prestige.” Later, in what I consider his seminal achievement, Agee – collaborating with Walker Percy’s camera lens – captured the plight of three white sharecropping families during the Dust Bowl in Let Us Now Praise Famous Men. These farmers – gaunt, ragged, uneducated – weren’t sieves on American progress but to be revered. The farm, Agee wrote, is “as a water spider whose feet print but do not break the gliding water membrane…it sustains its entity upon the blind breadth and steady heave of nature.”

The assignment made Agee more conscious of stereotypes: letters to Flye denounced derogatory war terms such as Jap, Nip, Reds; that blacks were genetically inferior; that all Jews were “clannish, interdependent and predatory.” The world’s horrors, however, always burdened Agee: he was circumspect of the atomic bomb and artificial insemination. He proposed to Flye writing a “long, anguished love letter” in which the writer is God and the letter is to the human race.

In one letter, Agee juxtaposes the accident that befell his birth father – A Death in the Family, his final work, was published posthumously – with the lengthy death sentence assigned to his stepfather, who was diagnosed with terminal cancer. Agee doesn’t blame God. “I don’t think He so directs traffic that one truck miraculously stops short on a precipice and another demolishes a child.” As much as Agee felt God wasn’t “directing traffic” at the intersection of good and evil, of happiness and suffering, among his last letters was a resounding statement about his own faith: “But at all times I feel sure that my own shapeless personal religious sense, whatever that may be, is deepening and increasing. Everything that is, is holy.”