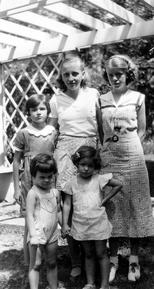 Led by Margaret Truman, they were known as the Hen House Hicks

All the sudden, Margaret felt like she had been taken prisoner,” Gard said.

arbara Allen Gard was 5 or 6 years old when she met up with the gang.
The gang, who all lived in homes near Maple Avenue and Delaware Street in Independence, was comprised of Gard and her three sisters, the two Ogden girls and, lastly, the leader of the bunch, a precocious, carefree teen named Margaret Truman.
They called themselves the Hen House Hicks.
Their mantra: To investigate the goings-on of the neighborhood.
“We were a big herd of girls that just loved to sensationalize things,” Gard said.
The place of work was the former chicken coup in the Allen home backyard. There they typed on carbon paper a newsletter that was delivered to a dozen or so surrounding homes.
In the newsletters, they would speculate why Mr. Truman’s pajamas weren’t ironed on a particular evening, or tell how members of the community were keeping cool during a heat spell (one gentleman was spied soaking his clothes in icy water before tending to chores around the house), or they would write of some terrific mystery circulating the block (such as the origins of a peculiar smell or why one neighbor wouldn’t return home on some days until early in the morning).
But Gard’s role was limited in the operation.
“The girls told me what to do and, boy, I did it,” Gard said. “If I didn’t, I’d be sentenced to play with my dolls.”

n weekends, the clothesline in the Ogden backyard was draped with bed comforters that were used as stage curtains.
When the curtains drew back, the gang performed comedies and dramas with elaborate costumes, which included emu-plumed hats held over from the Roaring Twenties and furs of every description, all strewn together from closets and trunks neighborhood-wide.
All productions were original and admission was charged with all proceeds to benefit a penny ice fund.
Usually a word of the play would be mentioned in that week’s newsletter and, hours before the show was to commence, the gang would roam door-to-door, reminding everyone of the upcoming production.
“People from the area would come in droves,” Gard said.
Lawn chairs were set up by the parents; sometimes Harry Truman himself would volunteer.
“I don’t remember the gist to any of the plays,” Gard said. “I do remember them being quite funny and very colorful.”

ard also remembers another aspect of the productions: Margaret Truman’s soprano.
“She had the most beautiful voice,” Gard said.
Margaret Truman was always enamored with singing; for years she kept a scrapbook that showcased clippings of her favorite singers, including renowned tenor Lauritz Melchior.
“Frankly, I always agreed with Mr. Truman in his outrage against that one critic in 1950,” Gard said.
A music critic for The Washington Post, Paul Hume wrote in his column the day after Margaret Truman sang before a sold-out crowd at Constitution Hall that “she cannot sing very well.”
Harry Truman, who was president at the time, replied in a letter: “I have just read your lousy review…some day I hope to meet you. When that happens you’ll need a new nose, a lot of beefsteak for black eyes, and perhaps a supporter below!”

ard watched her father usher Harry Truman inside.
“Something was eating at Mr. Truman,” Gard said.
Truman had a seat at the dining room table while Gard’s father poured him a bourbon and branch water.
Truman shook his head and took a gulp from the glass.
“Harry,” Truman said. (Gard’s father’s name was also Harry). “This is the end of my career. This is political oblivion.”
Gard was at a loss. What is the meaning of oblivion, she wondered. So, Gard snuck down to her father’s study and grabbed a dictionary, leafing through it until her fingertip found its definition.
“I was horrified,” Gard said. “I thought Margaret’s father was going to disappear forever and not be heard from again.”
In fact, Truman had just returned from the Democratic convention. He was to be Franklin Roosevelt’s running mate in the 1944 presidential election.

ccording to Gard, Margaret Truman was on-track for a promising career in the performing arts – then Franklin Roosevelt passed and Harry Truman was the 33rd president of the United States.
“Just like that, Margaret’s train was derailed,” Gard said.
Almost immediately, a fence was erected around the perimeter of the home in which Margaret Truman grew up, restricting her usual comings and goings. Secret service personnel became a common sight.
“All the sudden, Margaret felt like she had been taken prisoner,” Gard said.

ltimately, Margaret Truman picked up and left for New York City, where she would live for more than 50 years before dying at an assisted living facility in Chicago on Tuesday.
“She wound up having a fun, wonderful career as a noted author and entertainer, and I’m very happy for her,” Gard said. “But her father becoming president took a toll.”
After settling in the Big Apple, Margaret Truman hardly ever visited her hometown.
“Margaret was a free-spirited person and someone who I think needed a big stage like New York,” Gard said.
Through the years, Gard, now 74, kept in contact with Margaret Truman, occasionally sending her a Christmas card and receiving one in return.
The last Gard heard from Margaret Truman was in a letter several years ago.
The letter grieved over the passing of Gard’s sister whom Margaret Truman was closest in age.
It also grieved over the times they all shared together as the Hen House Hicks.