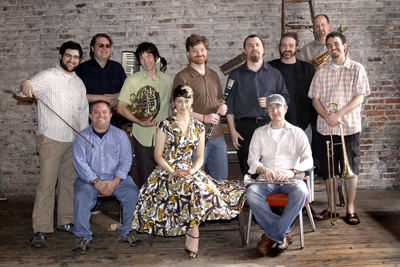 Our objective is to rile the people to revolt.”

s a big band leader, Brad Cox never wanted to be in the company of totalitarians such as Joseph Stalin.
“I want the band to be a return to socialism’s beginnings,” Cox says.
That’s why, in 2006, he changed the name of the 14-member ensemble he had formed several years earlier from Brad Cox’s Big Band to the People’s Liberation Big Band of Greater Kansas City.
Though the PLBB encourages individualism, Cox says, “it’s safe to say we’ll each spill our guts for the benefit of the whole.”
In short, the PLBB is a band of local brothers and sisters engaged with music of all kinds, whether homages to 1930s Kansas City jazz or sounds that are more familiar to contemporary audiences.
“We like to stir up the molecules in the room and let them find their way,” says Jeffrey Ruckman, who plays piano, accordion, tuba and gong. “Our objective is to rile the people to revolt,” he adds.
But what makes this collective unique among big bands isn’t its non-adherence to one genre but its powerhouse of talent: Most of its members are also teachers possessing advanced degrees in music, and any one of them is capable of powerful solo performances. In other words, membership is exclusive.
“To be a part of the PLBB, you have to be the sort of person who would be dead or institutionalized if not for music,” says bassist Jeff Harshbarger.

erhaps it’s fitting, then, that the PLBB is scoring the 1925 Sergei Eisenstein silent film, Battleship Potemkin.
“Really, it’s a marriage we’ve put off for too long,” says Ruckman, who is also one of the PLBB’s four regular composers. The others are Cox (who also plays the piano and accordion), Harshbarger and Patrick Alonzo Conway. Each is contributing to the Battleship Potemkin soundtrack.
The band’s revolutionary intentions are nothing new.
In December 2006, for the first show under the People’s Liberation banner, the group “deranged” Tchaikovsky’s The Nutcracker, reverting to E.T.A. Hoffmann’s source material, The Nutcracker and the Mouse King, which includes “The Story of the Hard Nut.”
“It’s 100 percent weirder than the modernized Tchaikovsky version,” Harshbarger says.
This Christmas, the PLBB will collaborate with the Owen/Cox Dance Group (led by Cox and his wife, Jennifer Owen, a professional choreographer) to again stage the production at All Souls Unitarian Universalist Church.
In October 2007, the PLBB spearheaded a show at La Esquina in which Cox’s compositions and Owen’s choreogaphy were meshed with a suite that Conway wrote for an Afro-Cuban drumming act called Grupo Manos. The event included a presentation of Mark Southerland’s playable horn sculptures and a visit from the 65-member Richmond High School Marching Band.
People’s Lib also appears the first Sunday of each month at the Record Bar as part of Harshbarger’s Alternative Jazz Series.

ut the group has never taken on a ship quite like the Potemkin.
In its use of montage (the rapid-fire sequencing of independent shots), Battleship Potemkin is not some dated propaganda piece that anchors the eyelids — it’s an eye-opening experiment that’s about as subtle as spontaneous combustion. Suggesting that the score for the film be rewritten every 20 years for the sake of relevance, Eisenstein wrote, “The audience must be lashed into a fury and shaken violently by the volume of the sound.”
After watching a screening of Potemkin together, the composers claimed aloud which scenes they wished to score. Oddly enough, no two composers shouted for the same scene.
Conway says he gravitated toward an early scene in which Odessans bring food to malnourished sailors. “I tried to capture the generally upbeat mood of the boats going out to the ship, the still-hopeful movement of the boats,” he explains.
Ruckman says he was attracted to the theme of martyrdom in the film, whether it was the death of a priest or a lower-class sailor. He scored the scene in which a sailor’s corpse is viewed by a never-ending stream of townspeople, with the bourgeois women in white staying only momentarily while peasant women mourn on their knees for the entire scene.
“The audience is as foreign to the subject as I am, so it’s important that certain chords resonate so the audience can understand,” Ruckman says.
For Cox, it was all about shock value.
“‘The Odessa Staircase’ massacre is terrifying,” Cox says. “I also liked the scene where the soldiers are complaining about the maggoty meat.”
Cox says his score for that scene has a just-rinse-it-with-brine quality.
Even in a big band with big-time talent, it’s easy to see that Cox is the PLBB’s foundation. Cox’s compositions typically begin disorderly, with instruments sparring like fighting cocks, a cacophony that ultimately melds into unity.
“Music shouldn’t be this rigidly monolithic thing, nor should it be a free-for-all,” Cox says. “It should be a labor of love.”
Enjoy the fruits of Cox and his crew’s revolutionary labor Friday, May 1 (International Workers Day), at the Pistol.