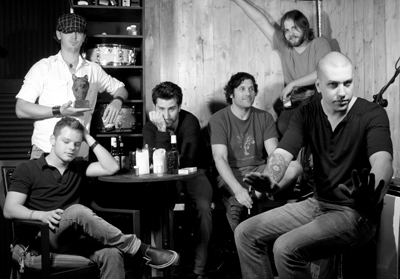 The Slowdown’s sections merge like the contents of a Cocaine energy drink.

n western Blue Springs, there is an ordinary home with an ordinary yard. And in that yard is a shed. With its rust-hued exterior, it seems no different from any other shed. But step inside and ye shall enter the Slowdown’s studio.
Thrust within walls spattered red, green and brown are all the band comforts: instruments, equipment, spare studio foam, a Swiss Army knife, a wood-carved bear head…
Also present are the makers of the music, a melodic distillation of brooding post-hardcore and alternative rock akin to the “Kansas City Sound” of the late ’90s. On drums is Kent Burnham, a collared 40-something who whams with the fluidity of an ass-grabbing adolescent. Next is Josh Johnson, the blue-jeaned and shaggy-headed lead guitarist. Sipping his Boulevard Single-Wide I.P.A. whenever the opportunity affords is Jeremy Wilson, who, also blue-jeaned and shaggy-headed, is the band’s bassist and recording engineer — a “master knob twiddler,” according to Johnson. Nearby, guitarist Austin Turney wears his clothing and hair like he’s auditioning for a role in The Wild One. Then there’s Sam Hoskins.

ead singer, songwriter and guitarist Hoskins, like his music, is part ying, part yang. As a personality, he is at once all smiles and all serious. His lyrics tap the subjects of alien life forms and earthly matters, like the death of a loved one. (Hoskins lost his father four years ago.) His right arm is clothed in tattoos, while his left arm is blank. His all-black ensemble renders his skin pallid, and his shaved skull draws lookers to his blue eyes.
The group’s sixth component is keyboardist and backup singer Joe Hoskins, Sam’s older brother by a decade. Like his brother, and so many of the Hoskins family, Joe has creative prowess: He is a self-taught graphic illustrator, tattoo artist and painter. Much of his artwork plays like a perturbed cartoon.
“We’re ubiquitously creative; everyone is either an artist or a musician,” Joe says.
Sam Hoskins dropped out of high school following his freshman year at Blue Springs. School didn’t interest him; music did. In 1997, Sam and Joe organized a band called Elevator Division with another Hoskins brother, James, as lead singer. After Joe, then in his late 20s, left for college four years later, the band would go on to achieve regional success before calling it quits in 2005. Having served as Elevator Division’s drummer, Sam found a new outlet in singing only after he had first mastered guitar and keyboards. Now, his pipes might be his greatest asset.
“Sam’s got one of those voices that can be heavy, and it can be beautiful,” Joe says.
It’s true. Sam’s voice is a profound thing. At its zenith, it pulverizes like a wall of water.

he Slowdown originated in late 2006 when Sam joined forces with Wilson, whom Sam equates with that humble-hearted carpenter who saved humankind.
“He’s the Jesus of the band,” Sam says. Aside from helping convert a toolshed into a studio, Wilson is a technological marvel. “He’s the gold bow on the box,” Sam says.
The Slowdown’s first two years were spent writing, recording and “medicating” before Alex Organ was added as the group’s first drummer. In late 2008, Johnson — a longtime friend of Sam’s — was given lead guitar.
It was following a February 2009 performance in Kansas City that the Slowdown was approached by A.D. Blanchard of Middle Child Booking. He proposed a three-week tour of the West Coast and Northwest beginning later that same month. All that was required of the band was an EP and some mode of transportation. They had neither. And all they had was a week and a half. So they polished nine tracks for an EP, which they self-titled. They dumped the van and trailer that they had been using for shows and bought a box truck. They slapped a layer of nondescript paint on it and tricked the hell out of its interior, devoting a third of its box space to storage and the rest to bunk beds and a chill pad.

he Slowdown made all its tour dates.
“Don’t know how, but we did,” Wilson says.
Version 2.0 of the Slowdown, which includes Turney and Burnham, formed several months ago. Burnham may be the sole member lacking a tattoo, but his experiences in the music industry certainly warrant one: He has played with two dozen groups, notably the Jeff Scheetz Band and Banshee, a popular power-metal band of the 1980s. Turney was enlisted for his merits.
“Austin can poke and stroke with the best of them,” Sam says.
With six players, the music comes together like it would for a top-tier rock band. Though there are four guitar parts, none fizz to the surface. The Slowdown’s sections merge like the contents of a Cocaine energy drink.
“You have to pay attention to the details,” Johnson says. “You can’t slop.”

he group anticipates its full-length album to be complete sometime later this year.
In the meantime, the Slowdown has much to do. Back in the studio, at the conclusion of a temple-thrashing instrumental in the song “Runaway,” Sam’s bobbing head comes to attention. He coolly leans toward the microphone.
Sam’s mouth fissures, spilling a voice that purrs like a house cat for a few lines before yielding to an uppity guitar.
During the intersession, Sam’s mouth widens like a levee slowly giving way to opposing forces. It’s his turn.
Sam’s voice detonates.