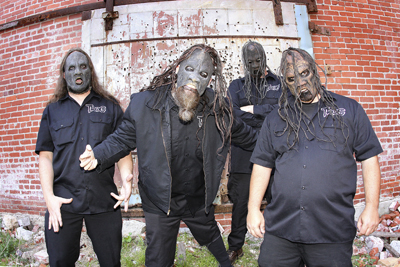 Listening to Troglodyte is like robbing a rabid animal of a meal and sticking around for the consequences.

igfoot death metal.
As Troglodyte, a four-man band from Independence, Missouri, calls it: “neandercore.” Or music as primitive as a caveman ripping ass — artfully.
“It’s its own brand,” says Ben Von Schiefelbusch, Troglodyte’s bassist. “We don’t write songs. There’s no preconstruction or preconceived ideas. They just happen.”
Or do they? Among Troglodyte’s bigger hits is a tune titled “Skunk Ape Rape.”
“It’s about a woman whose most pleasurable experience was being raped by a Bigfoot,” says Jeff Sisson, Troglodyte’s lead singer and founder. “It’s actually told from a woman’s perspective.”

ensibilities aside, Troglodyte is a band of unrelenting ferocity. Behind ghoulish masks, they pummel listeners with speed before unleashing an onslaught of teeth-gnashing slow grooves. Listening to Troglodyte is like robbing a rabid animal of a meal and sticking around for the consequences.
Troglodyte performs at the American Waste hardcore and metal fest this weekend. They’ll hit the outside stage at 6 p.m. Saturday as one of three dozen acts (headliners include Testament, Unearth and Lazarus A.D.) participating in the event June 6-7. Tickets to American Waste run $25 for one day or $35 for a two-day pass.

roglodyte was imagined in the summer of 2005, following a trip that Sisson took to Los Angeles, where he was visiting a friend. A lover of all things horror, Sisson took with him a copy of the cult-classic film The Pit, which his friend had never seen. It tells of a lonesome boy whose psychic powers allow him to open a pathway between this world and another, where heathenish beings called troglodytes find human flesh nourishing. In the film, whenever people become disagreeable, the boy casts them into a pit teeming with troglodytes.
During that same visit, Sisson and his friend found, at a video-rental store, a decrepit videocassette of Night of the Demon, a horror flick with Sasquatch as the antagonist.
“It just made sense,” Sisson says. “Troglodyte — a death-metal band where we wear masks and sing about Bigfoot.”
In late 2005, Sisson met drummer C.L. Wilson and guitarist Jack Riedel, who was with a pornogrind band called Disinterment, which penned such songs as “Graveyard Fornication” and “Formaldehyde Twat Bong.” Sisson told them of his idea for a band.
“I thought he was fucking joking,” Riedel says. “Troglodyte sounds like it’d be about T.rexes. You know, dinosaurs and shit.”
The band would require Wilson and Riedel to slow down: Both were accustomed to the lightning-quick antics of gore grind. Troglodyte’s original bass guitarist was Gary Wray, who left for personal reasons. Von Schiefelbusch made his debut October 13, 2006, at the Brick in Kansas City.

hen in front of a live audience, Troglodyte doesn’t kill time with talk.
“Jibber jabber is a pet peeve of mine,” says Sisson, who wears thermal underwear and a coat onstage to keep himself intentionally uncomfortable.
The masks, now in their fourth generation, are form-fitting rubber, all cast from the same mold. From start to finish, a new mask takes about one week to make.
“They’re all the same mask,” says Sisson, who creates and cares for the masks. Each mask is detailed differently; Sisson removed the lower section of his mask to free his mouth and gargantuan beard.
In addition to designing everything bearing the Troglodyte label (viewable at neandercore.com), Sisson has done makeup and special effects for a host of indie films, including Dozers, Jessicka Rabid and Bonnie & Clyde vs. Dracula.
But Sisson — like his bandmates — is no salesman.
Enter Jordan Rogers.

ordan promotes us better than we promote ourselves,” Von Schiefelbusch says.
Rogers kicked off his Web site, kcanthem.com, an Internet-TV hybrid, in the summer of 2007. His coal-colored, pharaoh-long goatee and barely there blue jeans tell a lot about the Web site’s content. Featuring interviews and music videos conducted and edited by Rogers, it’s devoted to KC’s metal scene. (Full disclosure: The author acted in a comedy sketch produced last year by Kcanthem.com.)
“I got into really heavy metal when I was in Iraq,” says Rogers, who served as a Marine and was based near Ramadi, the capital of the Anbar province, from September 2005 to March 2006. He was awarded a Purple Heart for shrapnel he took to his legs after the Humvee he was riding in was hit by a roadside bomb.
Rogers brandishes the Troglodyte name every way he can — on a bumper sticker on his van or by wearing one of many mosh-pit-tested Trog T-shirts.
“I’ve heard about every metal or hardcore band in this area,” Rogers says. “Troglodyte is the best by far.”
Troglodyte’s latest album, yet untitled, is halfway complete. According to Wilson, it will be the fastest, most earsplitting effort by the band to date.
“There will be no such thing as casual listening,” Wilson says.
Bigfoot may be on his way to becoming a public figure.