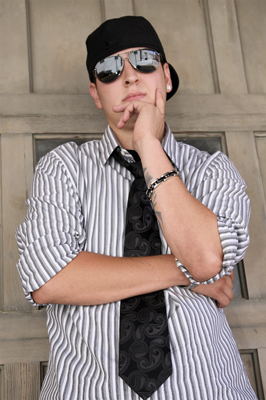 Vincent Galicia, a.k.a. VG, aims to teach Kansas City how to speak Spanish

I want to put on a good show, to be more than the guy walking around the stage with a microphone in my hand — caliente.”

ast December, Vincent Galicia lost almost everything.
Equipment worth $10,000 that he had nickel-and-dimed for a decade as a bricklayer — gone.
The 27-year-old and a few friends had devoted four months to building a studio in a commercial district on North 18th Street Expressway. It was to be a sunshiny space in earshot of foot traffic but, more important, it was a place where VG, his stage name, could thrive.
“It would give me a chance to formally introduce myself, to let everybody know VG is on the scene,” Galicia says.

he studio’s grand opening, however, would be littered with glass shards instead of confetti. Thieves left behind only a phone and a desk. And one other thing that Galicia hid if something like this happened.
“I wasn’t about to be beaten,” Galicia says. His arms are draped by tattoos on skin reddened by a day job befitting a chain gang.
On Galicia’s left biceps are tattoos of a treble clef and the title of his first album, a word he says he has always subscribed to: determined. On his other biceps is a dragon emerging from a sea of flames toward open sky.
“It basically stands for all the stuff you got to go through, all the hell you got to overcome to get to the top,” Galicia says.

few nights before the break-in, Galicia stashed a mastered CD copy of Supa Bad, the full-length album he’d been developing for three years.
The thieves didn’t find it.
Still, the break-in was not an easy event for Galicia to overcome. His insurance company offered him only $200 for the loss.
Galicia left Kansas City and visited Florida and Georgia, where he met Anthony Dent, multi-platinum songwriter and producer for the likes of Aretha Franklin and Destiny’s Child.
“Getting to meet him and tour his $3 million studio made me feel closer to where I want to be,” Galicia says. “It brought me back.”
Galicia also remembered his faith and the gift given to him.
“The Lord blessed me with music,” Galicia says. “Supa Bad was meant to come out.”

orn in Kansas City, Kansas, of Mexican-immigrant parents, Galicia learned English in school. At home, Spanish was preferred.
“I don’t look Mexican, but I am Chicano. My goal is to one day have the whole world speaking Spanish,” Galicia says.
Although Supa Bad is intended for an English-speaking audience, it is tinged with Spanish words and rhythms. Among Galicia’s chief collaborators is the Kansas City rapper C-los, a first-generation Puerto Rican. (Galicia mostly sings on Supa Bad.)
“I put the city on the album because I’m not afraid to say where I’m from,” says Galicia, who also collaborated on Supa Bad with such area acts as Nov, Staff, the Brain and Yung Beam. “I understand we’re not L.A., I get it that we’re not New York, but the bottom line is that KC’s hip-hop scene is going places.”

alicia admits that his first album, released in 2005, was unpolished — a sporadic byproduct of an artist eager to become part of the conversation. The one point of pride for Galicia was that it was a hit among the ladies, though he’s had that demographic nailed down since he was imitating boy bands in high school.
He remains confident that no matter your age, sex or musical preference, you’ll enjoy at least one song on Supa Bad.
“The first album was about finding myself. The second album is about getting down to business,” Galicia says.
A portion of Supa Bad’s subject matter derives from Galicia’s newfound fatherhood.
“My daughter changed my life,” says Galicia, whose daughter, Eva Marie, is 3 years old. “I want to change her life in everything I do.”
Supa Bad is a musical menagerie: pop, rap, reggaeton, R&B, techno. It’s got summer jams (“Gangsta Boo”), headphones music (“1,000 Words”) and baby-making music (“Physical Attraction”).
“One of my personal faves is the song ‘Supa Bad,'” Galicia says. “It puts you in that feel-good happy mood with that boom-boom clap, ba-boom-ta-boom clap.”

lthough the album carries an explicit language label, it’s light on vulgarity. It’s not about womanizing or trading an eye for a life or quarreling with the authorities. It’s a sometimes-high, sometimes-low portrait of urban America through the eyes of one member of the growing Latin American immigrant population.
The opening track of Supa Bad, titled “The Radio,” is Galicia’s introductory statement, one that sets listeners firmly in the passenger seat next to VG. Th’-the radio/Th’-the radio/Th’-the radio/Gon’-gon’-gon’ play my music, he chants on the chorus in a stuttering, Timberlakian falsetto.
“I got your ears, I got your brain — you’re mine,” he says of the song.
Galicia wants everyone not only to speak Spanish one day but also to speak Spanish his way.
In the coming weeks, Galicia says he will release a variation of Supa Bad, which he’s coining The Red Album, with 80 percent of the songs sung in Spanish.
Galicia is also in the process of developing a more marketable stage presence, in which he’ll be flanked by a horde of hip-jousting women not afraid to show some skin.
Galicia strokes his sparkling left-ear stud as he envisions himself onstage.
“I want to put on a good show, to be more than the guy walking around the stage with a microphone in my hand — caliente.”