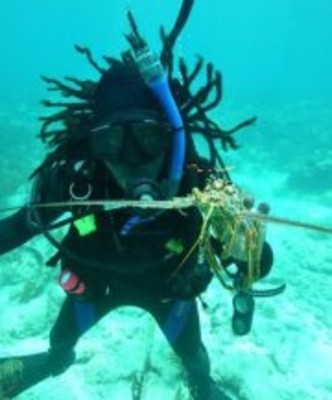 Teenage diver Kwadjo Tillman’s grit helps get him through hardship

Lynne Tillman has been homeless. She knows what it is to have nothing. At present, she’s living with a nephew in Independence. But she’s living for her son, Kwadjo Tillman, a precocious 14-year-old who is two certifications away from becoming a master diver. A few years from now, Kwadjo plans to attend college and double major in marine biology and bioengineering, but in order to do so he knows he must overcome every burden imaginable, from financial constraints to a lack of in-classroom education (he is currently home-schooled). “I don’t want him to lose his passion like so many children in this country,” Lynne said. “There’s too many young people whose dreams get deferred because of social standing; I won’t let anything hold Kwadjo back.”

t was the Tennessee Alliance for Progress — a coalition that, among other things, teaches life skills to underprivileged youth — that ushered Kwadjo onto the path he continues to tread. He was 8 years old when his mother, living in Nashville at the time, enrolled him in a TAP program that could ultimately lead to his
achieving a master diver designation. “I liked that a good percentage of those leading the programs were strong black males,” Lynne said. “I thought it was important that Kwadjo, even at an early age, know the strong side versus some of the challenges we see in our community with people hanging in the corner, without any cares or hope.” But even then it wasn’t easy. Kwadjo was four years below the minimum age allowed to enter the program.
“I begged and worked them to death,” Lynne said. Lynne isn’t the type of woman to take lightly; it’s evidenced in the coarseness of her hands, which have done everything from steering 18-wheelers to working as a rigger
during the Olympic games in Atlanta. According to a TAP spokesman, “There are exceptions to every rule, and Kwadjo was clearly that exception.”

nce given the go-ahead, Kwadjo learned to swim and snorkel and, three years later, was introduced to scuba diving at a youth summit in Florida. “At first, I pleaded with my mom to let me drop out of the program,” Kwadjo said. “But she wouldn’t budge.” Kwadjo’s first dive took place in February 2005 at Devil’s Den, Fla., where his mother made him a swim shirt and a skin to ensure he remained warm in the frigid temperatures of the fresh water quarry. “I thought the rule of layers applied underwater, too,” Lynne said. “Well, I was wrong.” Because he was wearing three layers — counting the wet suit — he overheated and perspired above ground. As a result, when he entered the water, he was colder than he would have been with fewer layers.
“I was colder than cold,” Kwadjo said. During that three-day stretch, Kwadjo earned his first certification,
open water training. Several months later, Kwadjo dove on the Henrietta Marie, a British slave ship that
sank off the Key West coast 300 years ago. The dive, intended for low-income black youth, was steered by the National Association of Black Scuba Divers. Kwadjo was in a group of 10 young people diving at the wreck site, which was discovered in 1972. The Nashville Metropolitan Council later issued a resolution in honor of his
achievement. According to Kwadjo, it was diving on the Henrietta Marie that made him the goal-oriented young man he is today. He remembers the inscription on a monument near the site. It reads: “Henrietta Marie: In memory and recognition of the courage, pain and suffering of enslaved African people. Speak her name and gently touch the souls of our ancestors.” Kwadjo said he knelt in prayer in front of the monument for what felt like hours. “My spirit was set on fire,” he said. Two years later, in the summer of 2007, Kwadjo was able to raise enough funds — due in large part to a hefty donation from a Kiwanis Club in Atlanta — to attend SeaTrek, a threeweek scuba diving program in the British Virgin Islands, though his mother was unable to go with him. “We couldn’t bring together enough money to get me there,” Lynne said. “And we’re still in a little bit of a hole, but that’s all right if my boy gets to live his dream.” At SeaTrek, Kwadjo said, he earned six additional certifications including advanced open water training, night diving, wreck diving, navigation diver, naturalist diver and
rescue diver.

his summer, Kwadjo will be involved with two educational dives. The first will take him to Biscayne National Park. It is sponsored by Diving with a Purpose, an underwater archaeology program in which individuals learn how to document wrecks as well as their contents. Previously, Kwadjo has only viewed underwater wrecks from an exterior vantage point; his weeklong training in Florida will earn him his underwater archaeology certification, thereby permitting him to penetrate any underwater structure if safety allows.
“I’m a little scared about that trip because I get a little claustrophobic in tight places,” Kwadjo said. “Oddly enough, though, they say people who are claustrophobic can’t dive, and I can dive just fine.” The second trip, sponsored by the Youth International Cultural Awareness Program, will give Kwadjo the opportunity to study the ecological system off the coast of Dominica. He will analyze the fish population and monitor the coral reef,
afterward sending the information to the Reef Environmental Education Foundation. It is in this that Kwadjo finds his greatest joy. “I want to be a marine biologist because I think it’s a career that can change the world,” Kwadjo said. “For one, a lot of people don’t realize that the cure to cancer could be in the fish we poach and unintentionally kill every day.” Lynne has always known her son was special. “He was one of those babies that popped out with his eyes wide and in-tune,” Lynne said.

n 2006, his first year of debate, Kwadjo placed 11th in the Atlanta city championships. That same year, without her knowing it, he acted as a guest speaker at a “Feed the Hungry” rally and worked as a
page for Atlanta Sen. Kasim Reed as part of the Boys to Manhood program. “My son is destined for great things,” Lynne said. “I’m just honored to be his campaign manager.” Evelyn Jones, who owns the H2 Go Scuba shop in
Chicago, said Kwadjo — whom she helped previous owner Michael Parnell mentor a few years ago — has discovered a
niche that suits him well. “I’d say it’s a natural progression for Kwadjo to find his way to marine biology from here,” Jones said.

n truth, Kwadjo has been reading up on advances in marine biology since he could pick up a book; one concept he developed recently won him second places at a technology fair in Kansas City, where Lynne and Kwadjo moved last fall. The event was headed by Black Family Awareness. It’s a three-component dive computer with sensors built into the dive skin itself. The elaborate system is designed to prevent such diving maladies as decompression sickness, nitrogen narcosis and hypothermia and includes a GPS locator and a hub in which text messages may be sent to the diver to alert him or her of danger. Kwadjo would like to play a part in a research team, such as one studying the blood cells of the horseshoe crab, which are remarkably adept at identifying and destroying objects foreign to the body early without the assistance of additional enzymes. “If we could create a cell in which your genetic information could be added to it, then it could reproduce itself in such a way to help defend you against certain diseases and even cancers,” Kwadjo said. “Who wouldn’t want to be a part of that?”

hen Kwadjo is submersed in his diving gear, which was gifted to him by the H2 Go Scuba shop, he has a look of belonging. His waist-deep dreadlocks seem capable of feeling, more like octopus tentacles than mere bundles of hair. As they sway and dance underwater it’s as if they could launch him in any direction at any moment — if danger were to ever present itself. But it’s not sharks, eels, barracuda or even jellyfish that
concerns his mother. It’s real world predators. Those who will pounce on ambition and make mincemeat of it if you so much as cast a lazy eye. That’s why Lynne has volunteered her life to take watch of Kwadjo. The physical testament is in her own dreadlocked hair, three months growth shy of her son.