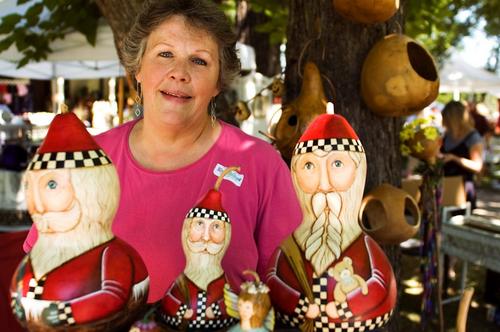 For Nancy Rowe, the Gourd Lady, squash is neither a food nor a sport – it’s an artform

“I let them get a little moldy, which creates a pattern that is as varied as one snowflake is from another,” Rowe said.

She’s known as The Gourd Lady and, no, she doesn’t don a costume made of dried fruit — although she did wear a costume when she gave living history seminars at Missouri Town.
“I’d tell you how to clean and preserve gourds — and be scratching myself in my antebellum wool dress the whole time,” Nancy Rowe said. “That sort of charade wasn’t for me.”
At the recent 20th annual Bingham-Waggoner antique and craft fair, Rowe dressed comfortably in a pink short-sleeved shirt with a sticker that read, in exclamatory lettering, “exhibitor.”
Looking down at the sticker, Rowe said, “Yeah, I know, I know, but at least now I can play myself in this century and sell my art.”
Rowe has been a fixture at the fair for 19 years. She and her dried gourd creations — which brightly caricature Uncle Sam, the Red Hat Society and the over-50 population — are as much a mainstay at the fair as kettle corn and carriage rides.
The recently retired schoolteacher’s interest in gourds began as a hobby, but when she became a single mother, creating and selling art pieces made out of dried gourds emerged as a secondary means of income.
“Teaching alone wasn’t cutting it financially,” Rowe said. “So making gourd art became my night job.”
The process of creating such an art form is extremely time-consuming, Rowe said.
“It’s not the paint or the brushes that makes this so difficult,” Rowe said. “The overhead is time.”
Allowing the freshly picked gourd to dry is the first step. This can occupy seven to eight months.
“I let them get a little moldy, which creates a pattern that is as varied as one snowflake is from another,” Rowe said.
Next, Rowe soaks and cleans the gourd in water and applies two coats of white sealer. She then pencils her design on the gourd, paints it and voila — gourd art. Depending on the amount of detail involved, the process can take as many as 50 hours to complete.
In spite of the degree of craftsmanship Rowe invests in her artwork, she’s outspoken about her flaws.
“I can’t do hands,” Rowe said. “I’ve tried many times over the last three decades, but still I resort to rounding them off like mittens, but I guess people don’t mind.”
Her gourd art was displayed in the Museum of Folk Art in New York City for nine years. Also, her gourds made yearly cameos atop the White House Christmas tree during the Ronald Reagan presidency.
For Rowe, the annual fair at the Bingham-Waggoner estate represents a terrific outlet for anyone looking to sell crafts or antiques.
“It’s only one day, and there’s a lot of good food, good shade and plenty of variety to choose from,” she said. “And, boy, the people really come.”