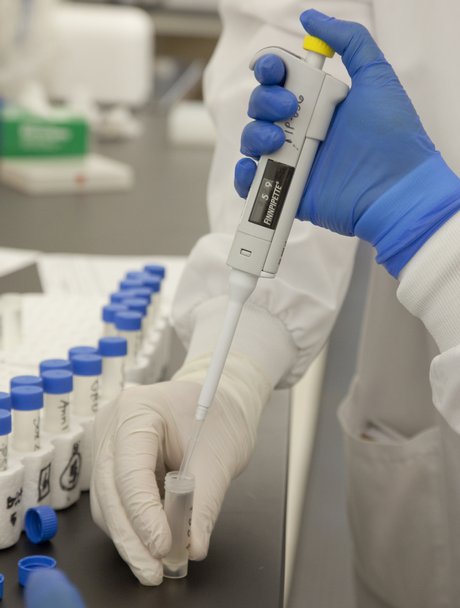 With Identigen, Symbiotics and OncImmune all settling in the Kansas City area over the next year – joining forces with nearly 120 companies already serving the animal health and nutrition industry – Kansas City is establishing itself as a national hot bed for the bio-tech industry.

Identigen
Identigen, a bio-science company that applies DNA tracing techniques to source verify meat products, opened its North American operations in Lawrence, Kan last June. The site was selected for its approximation to prospective customers in meat production as well as its relative location to the MCI airport.
“We’re within 300 miles of the largest meat production area in North America,” said Don Marvin, CEO of Identigen’s North American operations. “Site selection was a no-brainer.”
The proximity to the University of Kansas and Kansas State University, with its concentration on animal identification technology, also played an important factor.
The stand-alone all-brick facility is set on 3,000 square feet with plans for its square footage to double over the next 12 months. A carbon copy of its parent company in Dublin, half of Identigen’s space is devoted to a mostly automated ultra high-throughput genotyping laboratory, while the remainder is office space.
“Since the model we’ve established in Ireland has proven wildly successful, we figured that we’d simply replicate the facility here in North America,” Marvin said.
Identigen emerged from the “mad cow” scare in the United Kingdom in the mid-1990s. It utilizes technology that’s able to identify and trace the source of meat products through the entire supply chain, Marvin said.
Right now, Identigen has about a dozen people on staff. But, within five years, Marvin foresees 200 to 300 employees working at the facility.
“Slowly, consumer traits in the United Kingdom are finding their way to North America,” Marvin said. “People are beginning to understand that they have the right to know what it is, exactly, they’re buying – and that’s where we come in.”

Life Sciences Innovation Center at KU
On Jan. 23, the $58 million Life Sciences Innovation Center at KU opened its doors. The 205,000 square-foot research facility houses five floors with each focusing on a particular field of medicine.
The top three floors are all established programs supported by NIH grants. On the fifth floor is the liver program, which emphasizes liver function and disease. The fourth floor quarters the reproductive center with a concentration on male fertility. The next floor down holds the neuroscience program, which spotlights mental retardation and abnormal brain development and possesses the largest number of investigators. On the second floor is the proteomics (the study of proteins and their function) and molecular biology sector. Here, researchers can gain insight into how drugs interfere with cell function. These programs are emerging or growing. The ground floor houses clinical research space that, among other purposes, analyzes the link between obesity and diabetes. An animal research facility and numerous common use facilities also exist on the ground floor.
In addition to the $58 million spent on the building, another $20 million was tallied on equipment and furniture. Three hundred individuals coexist in the building. Among them are 76 pre-doctoral students, 70 faculty members (23 of whom are new to KU) and the remainder is research personnel including post-doctoral fellows, research technicians and office personnel.
Paul Terranova, vice chancellor for research at KU Medical Center, said the brightest highlight of The Life Sciences Innovation Center is the synergy that occurs between professors and students.
“All of the labs are contiguous, which creates a collaboration that is simply unparalleled,” Terranova said.

Synbiotics
Synbiotics, a veterinary diagnostic company originally out of San Diego, will be moving its headquarters to the Kansas City area by August of this year.
The reasons why Synbiotics opted to relocate are many. For one, Synbiotics has changed its emphasis from companion animal products (dogs, horses, cats) to a focus on swine/cattle food production, so a bulk of their customers are now within a 200-mile radius of Kansas City.
“We were about as far away from partners and customers as you could get geographically in the United States,” said Cliff Frank, vice president of strategic operations.
The area’s relation to some of the country’s leading veterinary schools was also influential on Synbiotics’ decision to relocate.
“The amount of qualified animal scientists in the region is second-to-none,” Frank said.
In addition, a larger space to devote to research and development was needed.
While the previous facility in San Diego had 1,400 square feet of research and development space, 2,500 square feet is planned for the new building. In all, the new facility will be approximately 12,000 square feet inside a 100,000 square-foot white marble building that once headquartered TWA.
The new facility will enable Synbiotics to handle their own cell culture work and fermentation processes on a limited scale.
“We will be able to work uniquely with individual viruses and microorganisms that cause disease,” Frank said. “In the past, we’ve had to contract out most of this type of work.”
The facility will feature flexible laboratory space – an idea Frank stole from the Dupont research lab in Iowa. Cabinets will have wheels that unlock and countertops will be reconfigurable to fit the needs of the researchers.
“It’s a major upgrade from what we’ve been dealing with in San Diego: open-bench diagnostic research that’s poorly designed to protect the sensitive nature of culture work,” Frank said.

OncImmune
The European-based life sciences company, OncImmune, hopes to open its North American headquarters in Lenexa by the end of 2007. OncImmune develops and commercializes technology that can detect breast and ovarian cancer four years earlier than a mammogram. Tony Barnes, CEO of OncImmune, said the move is intended to bring the company “next door to some of the finest cancer researchers at the KU Medical Center.”
OncImmune, founded in England in 2003, will generate 120 new jobs over the next four years. The company plans to invest $30 million into lab research in the area.
OncImmune will split commercial laboratory space with IBT, a reference laboratory already situated in Lenexa. The laboratory space will include open and reconfigurable floor space and furnishings that can easily accommodate new equipment and personnel.
Kansas City was selected due to its rich opportunity for collaboration.
OncImmune will team up with the KU Medical Center, KU School of Pharmacy and Higuchi Biosciences Center to explore other types of cancer including lung, prostate and colon.

Stowers Institute for Medical Research
In November of 2000, the $300 million Stowers Institute for Medical Research, a basic biomedical research company founded in 1994, opened its first set of customized labs at its 600,000 square-foot facility set on a 10-acre campus in Kansas City, Mo. Today, 380 people are employed at the Institute, including more than 300 members of the scientific staff. When the existing facility reaches capacity, which is expected to occur at the end of 2008, the Institute will accommodate 30 to 40 independent research programs with ten to 20 scientists, research associates and technicians in each. An additional 600,000 square-foot expansion on the Stowers campus is planned for completion in 2009.
“It has been co-founders Jim and Virginia Stowers’ hope that an expansion of such scale would occur every decade,” said Marie Jennings, spokesperson for the Stowers Institute.
Both Jim and Virginia Stowers, who reared their multi-billion-dollar fortune from American Century Companies, are lifelong Kansas Citians who believe the town ought to be at the heart of life science research.
“People thought they were crazy thinking that scientists would be willing to leave the sunshine and big cities of the coasts for the Midwest,” Jennings said. Kansas City is now home to nearly 120 companies devoted to human, plant and animal health. Almost one half of these companies are headquartered here.
Jim and Virginia Stowers, herself a nurse-anesthetist, built the institute with researchers in mind.
“The Stowers understand the amount of time researchers spend in the work place, so it’s always been there goal to create a warm, home-like, highly functional space for them,” Jennings said.
The Stowers Institute is laden with beautiful woodwork and tiles, all of which were chosen for their warmth of color. There’s also an overriding presence of paintings, sculpture and other artwork at the institute.
“The Stowers employed such a look because they view good science as a creative process,” Jennings said.
But the most revolutionary aspect of The Stowers Institute, and the most attractive feature to prospective investigators, is its customized labs.
When the institute identifies a new principal investigator, a member of the Stowers staff is dispatched to the researcher’s previous work environment. There, the Stowers staff member appraises how work was conducted, what equipment was used and how Stowers could best accommodate the new hire. Then, a six to eight month process of customizing lab space begins. Ninety percent of lab space is fixed while the remaining ten percent is modification-ready. It isn’t unusual for the institute to invest $500,000 to $1 million on a lab. While construction is ongoing, the new scientist is encouraged to visit with regularity for their suggestions on improvements.
Additionally, each lab is adjoined to a bonus room: a large, rectangular room with a lot of electrical outlets. Bonus rooms might be used as dark rooms, computer rooms, or space to store extra equipment.
“It’s our goal to have the lab space up-and-running by the time the researcher arrives,” Jennings said. “When they’re done unpacking the moving truck, we want them to feel comfortable enough to pick up where their research left off.”